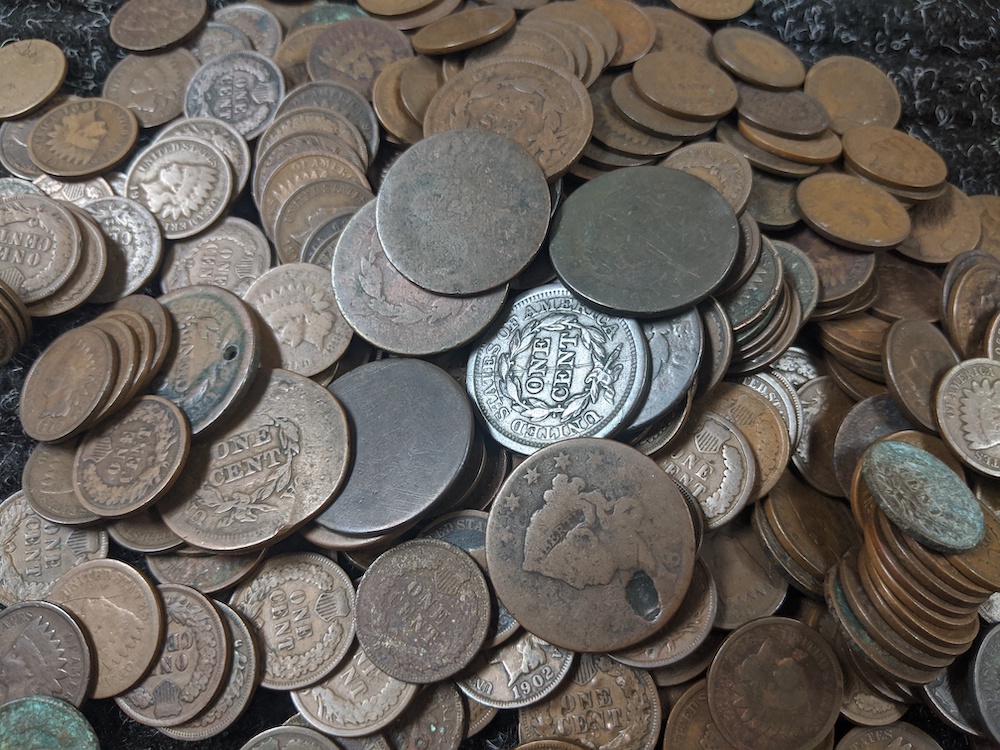 Two Cents (1864-1873) The two-cent piece was produced by the Mint of the United States for circulation from 1864 to 1872 and for collectors in 1873. Designed by James B. Longacre, there were decreasing mintages each year, as other minor coins such as the nickel proved more popular. It was abolished by the Mint Act of 1873.

The economic turmoil of the American Civil War caused government-issued coins, even the non-silver Indian Head cent, to vanish from circulation, hoarded by the public. One means of filling this gap was private token issues, often made of bronze. The cent at that time was struck of a copper-nickel alloy, the same diameter as the later Lincoln cent, but somewhat thicker. The piece was difficult for the Philadelphia Mint strike, and Mint officials, as well as the annual Assay Commission, recommended the coin’s replacement. Despite opposition from those wishing to keep the metal nickel in the coinage, led by Pennsylvania Congressman Thaddeus Stevens, Congress passed the Coinage Act of 1864, authorizing bronze cents and two-cent pieces.

Although initially popular in the absence of other federal coinage, the two-cent piece’s place in circulation was usurped by other non-precious metal coins which Congress subsequently authorized, the three-cent piece and the nickel. It was abolished in 1873; large quantities were redeemed by the government and melted. Nevertheless, two-cent pieces remain inexpensive by the standards of 19th-century American coinage.

Lincoln Pennies (1909-1958) The Lincoln cent (sometimes called the Lincoln penny) is a one-cent coin that has been struck by the United States Mint since 1909. The obverse or heads side was designed by Victor David Brenner, as was the original reverse, depicting two stalks of wheat (thus “wheat pennies”, struck 1909–1958). The coin has seen several reverse, or tails, designs and now bears one by Lyndall Bass depicting a Union shield. All coins struck by the United States government with a value of 1/100 of a dollar are called cents because the United States has always minted coins using decimals. The penny nickname is a carryover from the coins struck in England, which went to decimals for coins in 1971.

Flying Eagle Pennies (1856-1858) The Flying Eagle cent is a one-cent piece struck by the Mint of the United States as a pattern coin in 1856 and for circulation in 1857 and 1858. The coin was designed by Mint Chief Engraver James B. Longacre, with the eagle in flight based on the work of Longacre’s predecessor, Christian Gobrecht.

By the early 1850s, the large cent (about the size of a half dollar) being issued by the Mint was becoming both unpopular in commerce and expensive to coin. After experimenting with various sizes and compositions, the Mint decided on an alloy of 88% copper and 12% nickel for a new, smaller cent. After the Mint produced patterns with an 1856 date and gave them to legislators and officials, Congress formally authorized the new piece in February 1857.

The new cent was issued in exchange for the worn Spanish colonial silver coin that had circulated in the U.S. until then, as well as for its larger predecessor. So many cents were issued that they choked commercial channels, especially as they were not legal tender and no one had to take them. The eagle design did not strike well, and was replaced in 1859 by Longacre’s Indian Head cent.

Large Cents (1793-1857) The United States large cent was a coin with a face value of 1/100 of a United States dollar. Its nominal diameter was 1​1⁄8 inch (28.57 mm). The first official mintage of the large cent was in 1793, and its production continued until 1857, when it was officially replaced by the modern-size one-cent coin (commonly called the penny).

Large cents were made of nearly pure copper, or copper as pure as it emerged from smelting, without any deliberate addition of other metals. The Philadelphia Mint produced all large cents, which contained twice the copper of the half cent. This made the coins bulky and heavy, bigger than modern-day U.S. Quarters.

Half Cents (1793-1857) The half cent was the smallest denomination of United States coin ever minted. It was first minted in 1793 and last minted in 1857. It was minted with five different designs. There are several different types of half cents: Liberty Cap, Left, Liberty Cap, Right, Draped Bust, Classic Head, Braided Hair

Indian Head Penny (1859-1909) The Indian Head cent, also known as an Indian Head penny, was a one-cent coin ($0.01) produced by the United States Bureau of the Mint from 1859 to 1909. It was designed by James Barton Longacre, the Chief Engraver at the Philadelphia Mint.

In the postwar period, the cent became very popular and was struck in large numbers in most years. An exception was 1877 when a poor economy and little demand for cents created one of the rarest dates in the series. With the advent of coin-operated machines in the late 19th and early 20th centuries, even more cents were produced, reaching 100 million for the first time in 1907.

Three Cent Silver (1851-1873) The three-cent silver, also known as the three-cent piece in silver or trime, was struck by the Mint of the United States for circulation from 1851 to 1872, and as a proof coin in 1873. Designed by the Mint’s chief engraver, James B. Longacre, it circulated well while other silver coinage was being hoarded and melted.