IDENTIFY YOUR INHERITED COINS – HALF DOLLARS

Types of United States Half Dollars. 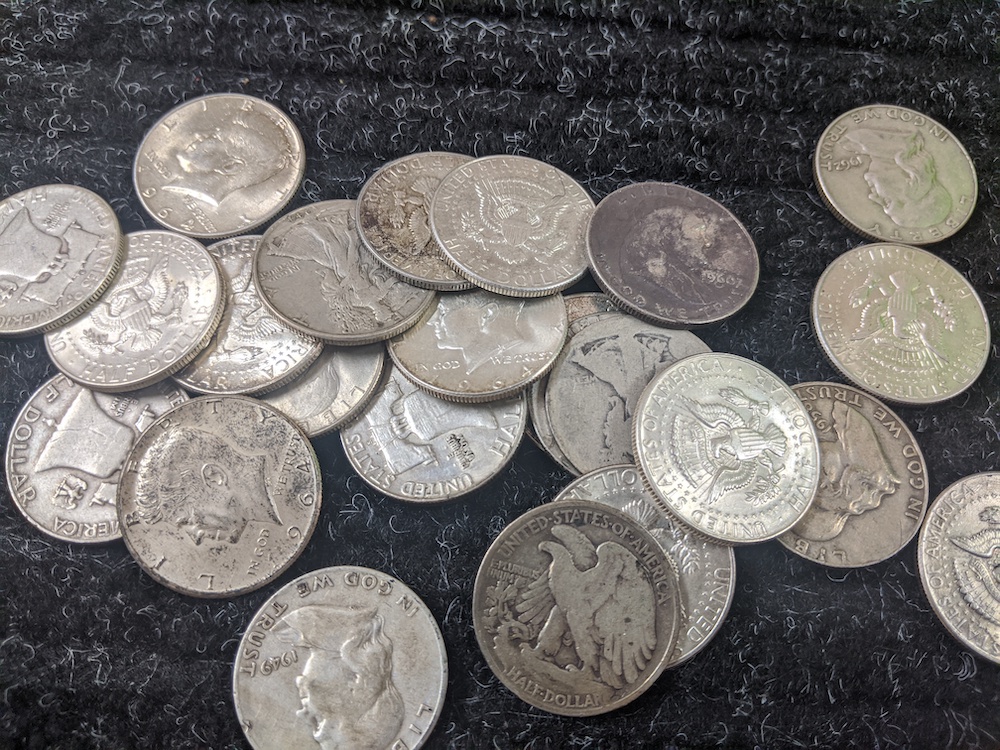 Franklin Half Dollar (1948-1963) The Franklin half dollar is a coin that was struck by the United States Mint from 1948 to 1963. The fifty-cent piece pictures Founding Father Benjamin Franklin on the obverse and the Liberty Bell on the reverse. A small eagle was placed to the right of the bell to fulfill the legal requirement that half dollars depict the figure of an eagle. Produced in 90 percent silver with a reeded edge, the coin was struck at the Philadelphia, Denver, and San Francisco mints.

Mint director Nellie Tayloe Ross had long admired Franklin, and wanted him to be depicted on a coin. In 1947, she instructed her chief engraver, John R. Sinnock, to prepare designs for a Franklin half dollar. Sinnock’s designs were based on his earlier work, but he died before their completion. The designs were completed by Sinnock’s successor, Gilroy Roberts. The Mint submitted the new designs to the Commission of Fine Arts (“Commission”) for its advisory opinion. The Commission disliked the small eagle and felt that depicting the crack in the Liberty Bell would expose the coinage to jokes and ridicule. Despite the Commission’s disapproval, the Mint proceeded with Sinnock’s designs.

After the coins were released in April 1948, the Mint received accusations that Sinnock’s initials “JRS” on the cutoff at Franklin’s shoulder were a tribute to Soviet dictator Joseph Stalin (Stalin did not have a middle name that began with an ‘R’). No change was made, with the Mint responding that the letters were simply the artist’s initials (The same accusation was made after the release of the Sinnock designed Roosevelt Dime in 1946). The coin was struck regularly until 1963. Beginning in 1964 it was replaced by the Kennedy half dollar, issued in honor of the assassinated President John F. Kennedy. Though the coin is still legal tender, its value to collectors or as silver (bullion value) both greatly exceed its face value.

Walking Liberty Half Dollar (1916-1947) The Walking Liberty half dollar is a silver 50-cent piece or half dollar coin that was issued by the United States Mint from 1916 to 1947; it was designed by Adolph A. Weinman, a well-known sculptor and engraver. In 1915, the new Mint Director, Robert W. Woolley, came to believe that he was not only allowed but required by law to replace coin designs that had been in use for 25 years. He therefore began the process of replacing the Barber coinage: dimes, quarters, and half dollars, all bearing similar designs by long-time Mint Engraver Charles E. Barber, and first struck in 1892. Woolley had the Commission of Fine Arts conduct a competition, as a result of which Weinman was selected to design the dime and half dollar.

Weinman’s design of Liberty striding towards the Sun for the half dollar proved difficult to perfect, and Treasury Secretary William G. McAdoo, whose department included the Mint, considered having Barber create his own design. Mint officials were successful in getting Weinman’s design into production, although it never struck very well, which may have been a factor in its replacement by the Franklin half dollar beginning in 1948. Nevertheless, art historian Cornelius Vermeule considered the piece to be among the most beautiful US coins. Since 1986, a modification of Weinman’s obverse design has been used for the American Silver Eagle, and the half dollar was issued in gold for its centennial in 2016.

Barber Half Dollar (1892-1915) The Barber coinage consists of a dime, quarter, and half dollar designed by United States Bureau of the Mint Chief Engraver Charles E. Barber. They were minted between 1892 and 1916, though no half dollars were struck in the final year of the series. By the late 1880s, there were increasing calls for the replacement of the Seated Liberty design, used since the 1830s on most denominations of silver coins. In 1891, Mint Director Edward O. Leech, having been authorized by Congress to approve coin redesigns, ordered a competition, seeking a new look for the silver coins. As only the winner would receive a cash prize, invited artists refused to participate and no entry from the public proved suitable. Leech instructed Barber to prepare new designs for the dime, quarter, and half dollar, and after the chief engraver made changes to secure Leech’s endorsement, they were approved by President Benjamin Harrison in November 1891. Striking of the new coins began the following January.

Public and artistic opinion of the new pieces was, and remains, mixed. In 1915, Mint officials began plans to replace them once the design’s minimum term expired in 1916. The Mint issued Barber dimes and quarters in 1916 to meet commercial demand, but before the end of the year, the Mercury dime, Standing Liberty quarter, and Walking Liberty half dollar had begun production. Most dates in the Barber coin series are not difficult to obtain, but the 1894 dime struck at the San Francisco Mint (1894-S), with a mintage of 24, is a great rarity.

Seated Liberty Half Dollar (1839-1891) The Seated Half Dollar, or Seated Liberty Half Dollar as it is sometimes known, was the second variety of Half Dollar ever produced. First introduced in 1839, the coin was quite different from the Bust Half Dollar that preceded it. The design was altered and the general public absolutely loved the coin, which probably explains why it remained in production until the latter stages of the 19th century. This coin type went through many minting changes such as, No Motto (1839-1866), Arrows & Rays (1853) ,With Arrows (1854-1855) ,With Motto (1866-1891), and With Arrows (1873-1874)

Kennedy Half Dollar (1964-)  The Kennedy half dollar, first minted in 1964, is a fifty-cent coin currently issued by the United States Mint. Intended as a memorial to the assassinated 35th President of the United States John F. Kennedy, it was authorized by Congress just over a month after his death. Use of existing works by Mint sculptors Gilroy Roberts and Frank Gasparro allowed dies to be prepared quickly, and striking of the new coins began in January 1964.

The silver coins were hoarded upon their release in March 1964 by collectors and those interested in a memento of the late president. Although the Mint greatly increased production, the denomination was seldom seen in circulation. Continued rises in the price of silver increased the hoarding—many early Kennedy half dollars have been melted for their silver content. Starting with 1965-dated pieces, the percentage of fine silver was reduced from 90% to 40% (silver clad), but even with this change the coin saw little circulation.

In 1971, silver was eliminated entirely from the coins and production increased, but the half dollar still saw only a minor increase in usage. A special design for the reverse of the half dollar was issued for the United States Bicentennial and was struck in 1975 and 1976. In addition to business strikes, special collector coins were struck for the Bicentennial in silver clad; silver proof sets in which the dime, quarter and half dollar were struck in 90% silver were first minted in 1992. In 2014, a special 50th anniversary edition of the Kennedy half dollar was also struck in 99.99% gold.

Even though ample supplies of circulating half dollars are readily available from most banks, their circulation is still limited. Since 2002, Kennedy half dollars have only been struck to satisfy the demand from collectors, and are available at a premium through the Mint.