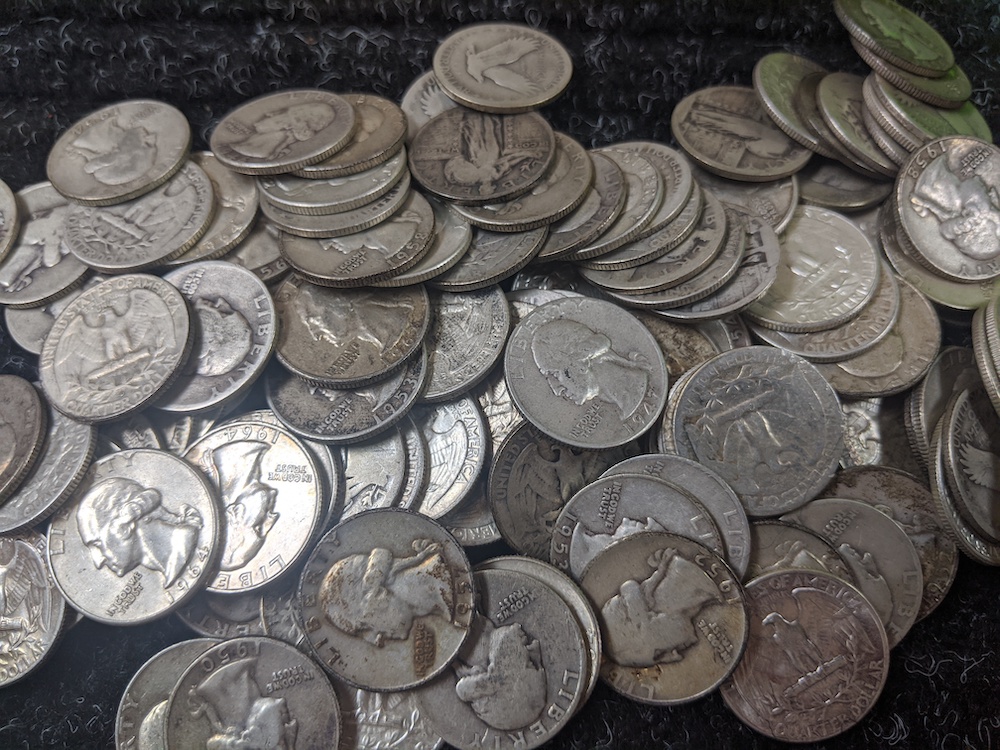 Silver Bust Quarter (1796-1838) Bust quarter refers to several designs of former United States coins. Basic Information and a brief overview; There are two types of bust quarters: Draped Bust (1797–1807) then Capped bust (1815–1828) The bust quarter was the first quarter to be issued by the United States Mint. The authorization of this denomination was in 1792 but not issued until 1796. With this coin being the first year of the quarter, it was not the first type of coin or the oldest coin issued by the U.S. Mint. The design of the Draped Bust quarter was probably done by Gilbert Stuart and the engraving was also done by Stuart. For the Capped Bust quarter I have John Reich for both.

The basic obverse design of the Seated Liberty coinage, designed by Mint engraver Christian Gobrecht and drawn by Thomas Sully, consisted of the figure of Liberty clad in a flowing dress and seated upon a rock. In her left hand, she holds a Liberty pole surmounted by a Phrygian cap, which had been a pre-eminent symbol of freedom during the movement of Neoclassicism (and in fact traces its roots back to Ancient Greece and Rome). Although it had fallen out of favor in Europe by 1830, Neoclassicism remained in vogue in the United States until after the American Civil War. Liberty’s right hand rested on the top corner of a striped shield with a diagonal banner inscribed with the word “Liberty”. The shield represented preparedness in the defense of freedom. The date of the coin appeared on the bottom below Liberty.

The basic reverse design of Seated Liberty coins depended on the denomination. The size of half dimes and dimes necessitated a smaller array of elements. On these coins, the reverse consistently featured a wreath around the words “half dime” or “one dime”. Before 1860, this wreath consisted of laurel leaves, a traditional Neoclassical image, but beginning that year, the wreath was enlarged and was filled not only with leaves, but also traditional American agricultural products, such as corn and wheat. On quarter, half dollars, and silver dollar coins, the reverse featured a central eagle about to take flight, with a striped shield upon its breast. The eagle clutched an olive branch of peace in its right talons and a group of arrows in its left talons. Above the eagle around the rim were the words “United States of America” and below the eagle around the rim lay the coin denomination. Beginning in 1866, the coins featured a ribbon with the motto “In God We Trust” above the eagle.

Silver Barber Quarter (1892-1916) The Barber coinage consists of a dime, quarter, and half dollar designed by United States Bureau of the Mint Chief Engraver Charles E. Barber. They were minted between 1892 and 1916, though no half dollars were struck in the final year of the series. By the late 1880s, there were increasing calls for the replacement of the Seated Liberty design, used since the 1830s on most denominations of silver coins. In 1891, Mint Director Edward O. Leech, having been authorized by Congress to approve coin redesigns, ordered a competition, seeking a new look for the silver coins. As only the winner would receive a cash prize, invited artists refused to participate and no entry from the public proved suitable. Leech instructed Barber to prepare new designs for the dime, quarter, and half dollar, and after the chief engraver made changes to secure Leech’s endorsement, they were approved by President Benjamin Harrison in November 1891. Striking of the new coins began the following January.

Public and artistic opinion of the new pieces was, and remains, mixed. In 1915, Mint officials began plans to replace them once the design’s minimum term expired in 1916. The Mint issued Barber dimes and quarters in 1916 to meet commercial demand, but before the end of the year, the Mercury dime, Standing Liberty quarter, and Walking Liberty half dollar had begun production. Most dates in the Barber coin series are not difficult to obtain, but the 1894 dime struck at the San Francisco Mint (1894-S), with a mintage of 24, is a great rarity.

Silver Standing Liberty Quarter (1916-1930) The Standing Liberty quarter is a 25-cent coin that was struck by the United States Mint from 1916 to 1930. It succeeded the Barber quarter, which had been minted since 1892. Featuring the goddess of Liberty on one side and an eagle in flight on the other, the coin was designed by American sculptor Hermon Atkins MacNeil.

In 1915, Director of the Mint Robert W. Woolley began steps to replace the Barber dime, quarter, and half dollar, as he mistakenly believed that the law required new designs. MacNeil submitted a militaristic design that showed Liberty on guard against attacks. The Mint required modifications to the initial design, and MacNeil’s revised version included dolphins to represent the oceans. In late 1916, Mint officials made major changes to the design without consulting MacNeil. The sculptor complained about the changes after receiving the new issue in January 1917. The Mint obtained special legislation to allow MacNeil to redesign the coin as he desired. One change made by the sculptor was the addition of a chain mail vest that covered Liberty’s formerly bare breast.

In circulation, the coin’s date wore away quickly, and Mint engravers modified the design in 1925 to address the issue. The Standing Liberty quarter was discontinued in 1931, a year in which no quarters were struck. By Congressional act the Washington quarter, featuring the first president’s profile, was introduced in 1932 to celebrate the bicentennial of his birth.

Silver Washington Quarter (1932-1964) 1965- present copper-nickel clad The Washington quarter is the present quarter dollar or 25-cent piece issued by the United States Mint. The coin was first struck in 1932; the original version was designed by sculptor John Flanagan. As the United States prepared to celebrate the 1932 bicentennial of the birth of its first president, George Washington, members of the bicentennial committee established by Congress sought a Washington half dollar. They wanted to displace for that year only the regular issue Walking Liberty half dollar; instead Congress permanently replaced the Standing Liberty quarter, requiring that a depiction of Washington appear on the obverse of the new coin. The committee had engaged sculptor Laura Gardin Fraser to design a commemorative medal, and wanted her to adapt her design for the quarter. Although Fraser’s work was supported by the Commission of Fine Arts and its chairman, Charles W. Moore, Treasury Secretary Andrew W. Mellon chose a design by Flanagan, and Mellon’s successor, Ogden L. Mills, refused to disturb the decision.

The new silver quarters entered circulation on August 1, 1932; and continued to be struck in silver until the Mint transitioned to copper-nickel clad coinage in 1965. A special reverse commemorating the United States Bicentennial was used in 1975 and 1976, with all pieces bearing the double date 1776–1976; there are no 1975-dated quarters. Since 1999, the original eagle reverse has not been used; instead that side of the quarter has commemorated the 50 states, the nation’s other jurisdictions, and National Park Service sites—the last as part of the America the Beautiful Quarters series, which will continue until 2021.