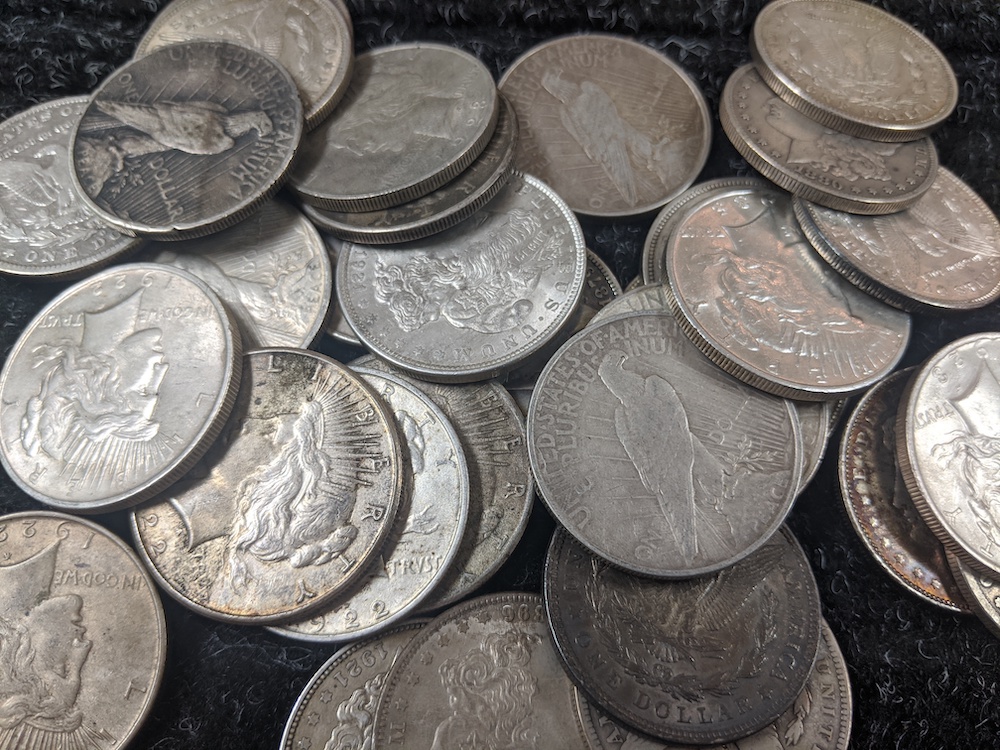 Peace Dollars (1921-1935) The Peace dollar is a United States dollar coin minted from 1921 to 1928, and again in 1934 and 1935. Designed by Anthony de Francisci, the coin was the result of a competition to find designs emblematic of peace. Its obverse represents the head and neck of the Goddess of Liberty in profile, and the reverse depicts a bald eagle at rest clutching an olive branch, with the legend “Peace”. It was the last United States dollar coin to be struck for circulation in silver.

With the passage of the Pittman Act in 1918, the United States Mint was required to strike millions of silver dollars, and began to do so in 1921, using the Morgan dollar design. Numismatists began to lobby the Mint to issue a coin that memorialized the peace following World War I; although they failed to get Congress to pass a bill requiring the redesign, they were able to persuade government officials to take action. The Peace dollar was approved by Treasury Secretary Andrew Mellon in December 1921, completing the redesign of United States coinage that had begun in 1907.

The public believed the announced design, which included a broken sword, was illustrative of defeat, and the Mint hastily acted to remove the sword. The Peace dollar was first struck on December 28, 1921; just over a million were coined bearing a 1921 date. When the Pittman Act requirements were met in 1928, the mint ceased production of the coins, but more were struck during 1934 and 1935 as a result of further legislation. In 1965, amid much controversy, the Denver mint struck over 316,000 Peace dollars dated 1964, but these were never issued, and all are believed to have been melted.

Morgan Silver Dollar (1878-1921) The Morgan dollar was a United States dollar coin minted from 1878 to 1904, and again in 1921. It was the first standard silver dollar minted since the passage of the Coinage Act of 1873, which ended the free coining of silver and the production of the previous design, the Seated Liberty dollar. The coin is named after its designer, United States Mint Assistant Engraver George T. Morgan. The obverse depicts a profile portrait representing Liberty, while the reverse depicts an eagle with wings outstretched. The mint mark, if present, appears on the reverse above the “o” in “Dollar”.

The dollar was authorized by the Bland–Allison Act. Following the passage of the 1873 act, mining interests lobbied to restore free silver, which would require the Mint to accept all silver presented to it and return it, struck into coin. Instead, the Bland–Allison Act was passed, which required the Treasury to purchase between two and four million dollars’ worth of silver at market value to be coined into dollars each month. In 1890, the Bland–Allison Act was repealed by the Sherman Silver Purchase Act, which required the Treasury to purchase 4,500,000 troy ounces (140,000 kg) of silver each month, but only required further silver dollar production for one year. This act, once again, was repealed in 1893.

In 1898, Congress approved a bill that required all remaining bullion purchased under the Sherman Silver Purchase Act to be coined into silver dollars. When those silver reserves were depleted in 1904, the Mint ceased to strike the Morgan dollar. The Pittman Act, passed in 1918, authorized the melting and recoining of millions of silver dollars. Pursuant to the act, Morgan dollars resumed mintage for one year in 1921. The design was replaced by the Peace dollar later the same year.

In the early 1960s, a large quantity of uncirculated Morgan dollars in their original bags were discovered in the Treasury vaults, including issues once thought rare. Individuals began purchasing large quantities of the pieces at face value and then removed them from circulation through hoarding, and eventually the Treasury ceased exchanging silver certificates for silver coin. Beginning in the 1970s, the Treasury conducted a sale of silver dollars minted at the Carson City Mint through the General Services Administration. In 2006, Morgan’s reverse design was used on a silver dollar issued to commemorate the old San Francisco Mint building.

Bust Dollar (1794-1804) The Draped Bust dollar is a United States dollar coin minted from 1795 to 1803, and was reproduced, dated 1804, into the 1850s. The design succeeded the Flowing Hair dollar, which began mintage in 1794 and was the first silver dollar struck by the United States Mint. The designer is unknown, though the distinction is usually credited to artist Gilbert Stuart. The model is also unknown, though Ann Willing Bingham has been suggested.

In October 1795, newly appointed Mint Director Elias Boudinot ordered that the legal fineness of 0.892 (89.2%) silver be used for the dollar rather than the unauthorized fineness of 0.900 (90%) silver that had been used since the denomination was first minted in 1794. Due largely to a decrease in the amount of silver deposited at the Philadelphia Mint, coinage of silver dollars declined throughout the latter years of the 18th century. In 1804, coinage of silver dollars was halted; the last date used during regular mint production was 1803.

In 1834, silver dollar production was temporarily restarted to supply a diplomatic mission to Asia with a special set of proof coins. Officials mistakenly believed that dollars had last been minted with the date 1804, prompting them to use that date rather than the date in which the coins were actually struck. A limited number of 1804 dollars were struck by the Mint in later years, and they remain rare and valuable.

Seated Liberty Dollar (1840-1873) The Seated Liberty dollar was a dollar coin struck by the United States Mint from 1840 to 1873 and designed by its chief engraver, Christian Gobrecht. It was the last silver coin of that denomination to be struck before passage of the Coinage Act of 1873, which temporarily ended production of the silver dollar for American commerce. The coin’s obverse is based on that of the Gobrecht dollar, which had been minted experimentally from 1836 to 1839. However, the soaring eagle used on the reverse of the Gobrecht dollar was not used; instead, the United States Mint (Mint) used a heraldic eagle, based on a design by late Mint Chief Engraver John Reich first utilized on coins in 1807.

Seated Liberty dollars were initially struck only at the Philadelphia Mint; in 1846, production began at the New Orleans facility. In the late 1840s, the price of silver increased relative to gold because of an increase in supply of the latter caused by the California Gold Rush; this led to the hoarding, export, and melting of American silver coins. The Coinage Act of 1853 decreased the weight of all silver coins of five cents or higher, except for the dollar, but also required a supplemental payment from those wishing their bullion struck into dollar coins. As little silver was being presented to the US Mint at the time, production remained low. In the final years of the series, there was more silver produced in the US, and mintages increased.

In 1866, “In God We Trust” was added to the dollar following its introduction to United States coinage earlier in the decade. Seated Liberty dollar production was halted by the Coinage Act of 1873, which authorized the trade dollar for use in foreign commerce. Representatives of silver interests were unhappy when the metal’s price dropped again in the mid-1870s; they advocated the resumption of the free coinage of silver into legal tender, and after the passage of the Bland–Allison Act in 1878, production resumed with the Morgan dollar.

Eisenhower dollar (1971 to 1978) The Eisenhower dollar was a one-dollar coin issued by the United States Mint from 1971 to 1978; it was the first coin of that denomination issued by the Mint since the Peace dollar series ended in 1935. The coin depicts President Dwight D. Eisenhower on the obverse, and a stylized image honoring the 1969 Apollo 11 Moon mission on the reverse, with both sides designed by Frank Gasparro (the reverse is based on the Apollo 11 mission patch designed by astronaut Michael Collins). It is the only large-size U.S. dollar coin whose circulation strikes contained no silver.

In 1965, because of rises in bullion prices, the Mint began to strike copper-nickel clad coins instead of silver. No dollar coins had been issued in thirty years, but beginning in 1969, legislators sought to reintroduce a dollar coin into commerce. After Eisenhower died that March, there were a number of proposals to honor him with the new coin. While these bills generally commanded wide support, enactment was delayed by a dispute over whether the new coin should be in base metal or 40% silver. In 1970, a compromise was reached to strike the Eisenhower dollar in base metal for circulation, and in 40% silver as a collectible. President Richard Nixon, who had served as vice president under Eisenhower, signed legislation authorizing mintage of the new coin on December 31, 1970.